A Brief Guide to Westonbirt, The National Arboretum

*As of the time of writing, Westonbirt Arboretum is currently open to local residents only as part of the national lockdown across England. Westonbirt Arboretum remains open with a pre-booking system for people to exercise once-per-day. More information can be found here. 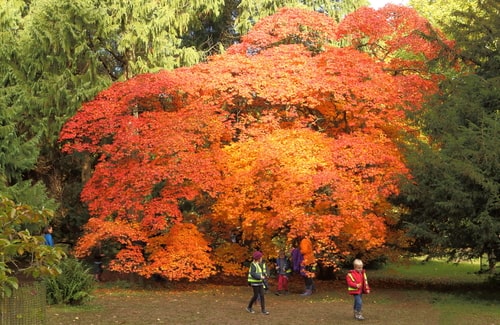 Established in the last year of King George IV’s reign in 1829 by Robert Stayner Holford, Westonbirt Arboretum is a marvel of horticulture planning. During the Victorian period, Holford became, among other things, a gardening and landscaping enthusiast. His great wealth allowed him to grow Westonbirt Arboretum and rebuild the Georgian mansion Westonbirt House. As the years went on, the arboretum was cared for and extended by Holford’s son, George Lindsay Holford.

It was after George Holford’s death in 1926, ownership fell to George’s nephew, Edmond Robert Parker the fourth Earl of Morley. It was in 1927 when the family mansion, Westonbirt House was separated from the arboretum and became a boarding school for girls. Today, Westonbirt Arboretum is owned and managed by Forestry England and has been since 1956.

Westonbirt Arboretum is full of beautiful unique species of plant life, gathered from the farthest reaches of the world. Holford Snr was able to finance great expeditions on quests to find the rarest and extraordinary plants, many of which are still in their original resettlement spots. Romantic Poet William Wordsworth often had written about the beauty of the English landscape and how it made him proud to be an Englishman, comparable to these lands. It’s no surprise that Holford designed the arboretum aesthetically, showing the plant life to their full picturesque potential.

An example of some of the exceptional 15,000 trees that can be spotted around the 600 acres of land includes national plant collections, Japanese Maple Cultivars, Maples, Bladdernut, Lime, Walnut. The arboretum also boasts 140 champion trees, which qualify for being the tallest or widest trunk girth. Another category of trees includes signature trees Incense Cedars and Scots Pine, species that have come to perform particular roles in the Westonbirt’s landscape, owing to their size, location or number. The arboretum is also home to around 100 rare and threatened species including Sapphire Dragon Tree and Madeira Mountain Ash. Westonbirt Arboretum has produced a brilliant interactive map that plots each tree for you to find. 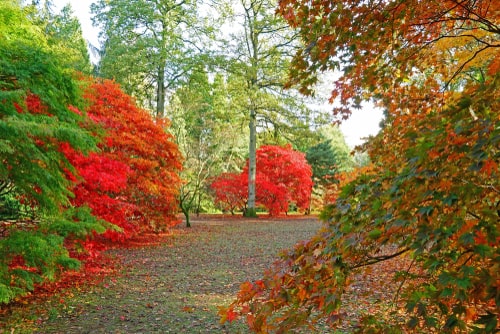 Westonbirt Arboretum has many facilities; however, it is worth checking before your trip to make sure you’re up to date. Dogs are welcome on The Downs when on leads and unleashed when in Silk Wood. However, across the Old Arboretum, it is a dog-free zone. For more information about the facilities available at Westonbirt Arboretum visit their website.

Westonbirt is open every day except Christmas day, from 9 am with free parking. However, there are entrance fees: